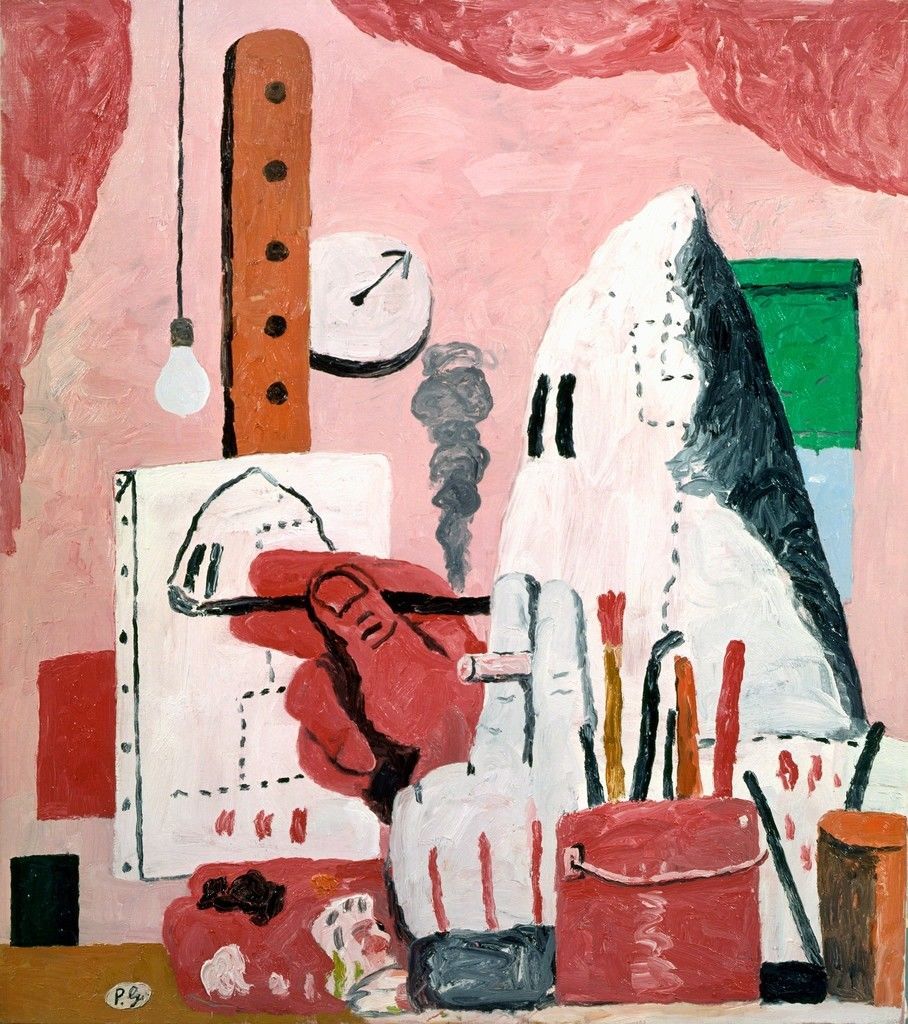 Short writing task for the CVAN NW Critical Writing Programme and Bursary. I was asked to write for 15 minutes about Philip Guston's painting 'The Studio' (1969) which was shown on a screen. I had not seen the painting before so my writing was based solely upon my first impressions:

A hooded man makes a painting of himself in a pink studio. In the centre of the painting a puff of grey smoke rises from a cigarette, held by a hand that looks as if it is contained within a white glove - the sort of glove that Mickey Mouse might wear. A single bare light bulb hangs down to the left of the easel where the hooded man's red hand is mid way through painting the hood of his self portrait. Is the hood he wears the same as the hoods worn by members of the Ku Klux Klan? Why is the artist wearing it? What could it mean?

Short writing task for the CVAN NW Critical Writing Programme and Bursary. I was asked to choose an object in my home that means something to me and write 150 words about it. The object I chose was Martin Parr's photobook 'The Last Resort' (1986):

In the mid to late 1980s my grandmother (a short, stocky, working class woman with a fondness for alcohol, whom I was afraid of and who perhaps made up for her lack of height and lack of life opportunities by her aggressive manner) would occasionally take my sister and me on a ferry across the Mersey, to the run down seaside resort New Brighton. A place captured in the 1980s by the middle class photographer Martin Parr with unforgiving flash in his photobook ‘The Last Resort’. Parr chose busy weekends and bank holiday’s when the place was at its most littered and crowded and captured anxious looking working class families desperately trying to have a good time. His book displays a side of New Brighto﻿n unfamiliar to me, I recall the bleakness and desolation of the place, riding on run down rides, eating in empty cafes, off peak and on Sunday.

I am writing this following a wasted day that should of been spent writing about ‘the working class’ and its representation in art for a PhD thesis, and instead has been wasted getting depressed about politics.

My generation, those around the age of 36/37 and the last to receive a grant for university, can be argued as the last to believe that to have a degree was a real achievement, something special and a guarantee of a decent job.

Having a working class background, growing up in a so called ‘socially deprived area’ and attending the nearest and roughest secondary school in my area meant that the odds were already against me and the idea of going to university was not something automatically expected. Unlike the middle classes, my parents did not strategically plan an academic career for me, they did not know about all the hidden ways of advancing their children’s education and employment prospects in order for them to get ahead (ranging from living in the right postcode and employing tutors to knowing the right people). Bullied throughout secondary school, mourning the loss of a stable family life to divorce, and with crushingly low self esteem, I was a severely depressed teenager and once even made a half hearted attempt to take my own life. Art was the main subject I had a talent for and the one thing that got me through those dark years.

Following my degree I continued to work part time in a bar for a minimum wage and hoped to try to find a better paid and more rewarding job. Realising that I would find it hard to get another type of job (and that my art degree was not worth the paper it was written on) I moved to yet another pub and worked there on poverty wages for another few years whilst living in a bedsit. To cut a long story short, I spent the whole of my twenties either working in minimum waged, part time jobs or in periods of unemployment, barely surviving, living in squalor, and feeling demoralised, worthless and depressed. I blamed myself for my lack of success, not knowing who else to blame and wondering why I couldn't find a job as least as good as that of my parents.

Little did I know that not only was I living in a city (Liverpool) and a region (the North West) that has always been plagued with higher rates of unemployment than the rest of the UK, but also, that I was living through a significant period of economic upheaval, through the transition from an industrial based economy to a service based economy (1976 onwards), and that since then, permanent rates of high unemployment had become an unavoidable and accepted part of that economy, a way of keeping wages down and workers insecure. Why did I not know? Because the rhetoric of Politians led everyone to believe we that we were living in a meritocracy, that we were all on a level playing field and those who tried hard would be rewarded with a decent job.

Fast forward to this week – I am feeling depressed, why? Because people who haven’t had my life experiences and who have been taken in by all the propaganda that has dominated our television screens for nearly the last twenty years cannot empathise with the weakest in our society. The endless benefits programmes and rhetoric of politians designed to turn people against those on welfare, and to accept cruel and pointless policies designed to punish the most vulnerable in society has triumphed, and there is nothing I can do about it.