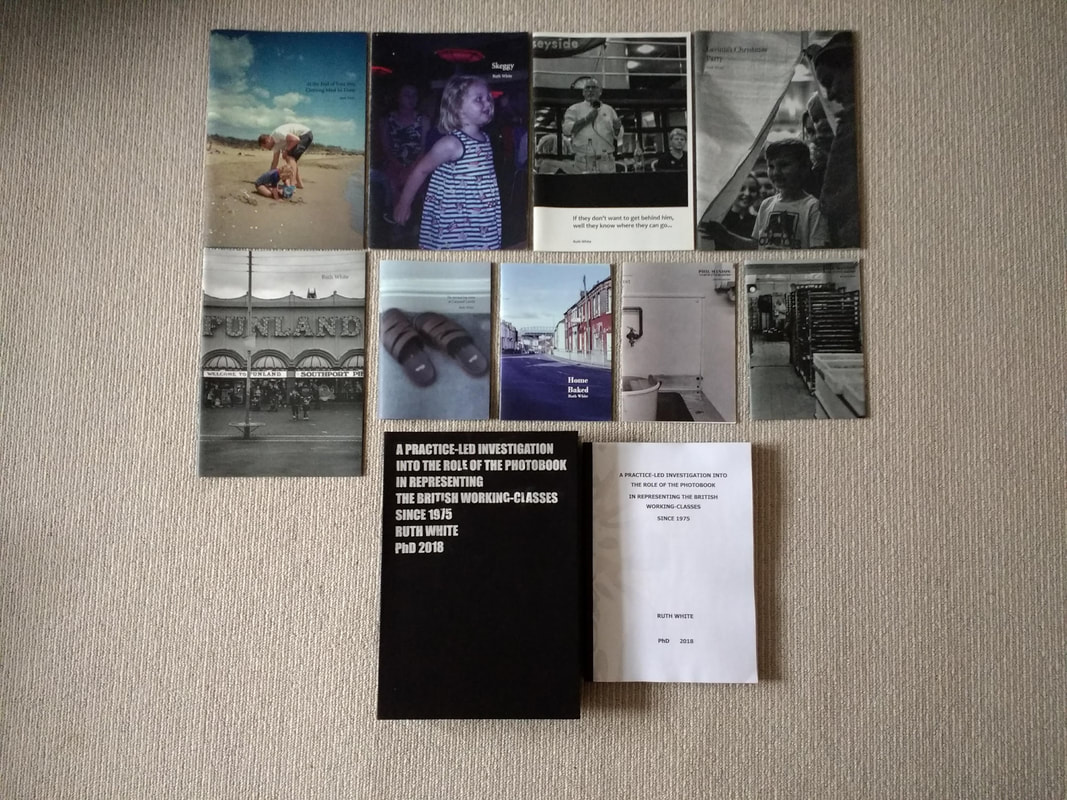 Driven by my working-class upbringing during the Thatcher period and a desire to communicate something about the ‘psychic landscape’ (Diane Reay, 2005) and ‘hidden injuries’ (Sennett and Cobb, 1972) of class, the aim of my PhD research is to demonstrate how photobook practice can be used as a method for investigating the lived experience of class. It further aims to highlight the important role that photobooks have played in documenting and contributing to our understanding of the impact of Thatcherism upon working-class lives.

Thatcherism marks a period of significant socio-economic upheaval and change in Britain which has had a profound effect on the life trajectories of the British working-classes. Many of the changes brought about and accelerated by Thatcherism can be seen within a small number of photobooks produced within the period. Yet, a comprehensive account of the significant contribution these photobooks have made to our understanding of the lived experience of class within the Thatcher period has not yet been written, therefore, my research fills this gap.

The research is practice-led and inter-disciplinary, culminating in the production of a collection of eight photo zines about the main areas of working-class life: family, relationships, work, leisure and to a lesser extent – formal politics.

The slideshows below are all of the photographs used for each of the photo zines produced for the PhD.

He Served His Time at Cammell Lairds is an A5, forty-page, colour photo zine about the material conditions of my deceased father-in-law’s bedroom.

He Served His Time at Cammell Lairds is metonymically about many things. It is about the living standards of working-class families who have lived through Thatcherism, the standard of living provided by working-class jobs in general, and the demise of those types of apprenticeships and skilled jobs for working-class men which was accelerated by Thatcherism

The title He Served His Time at Cammell Lairds is a reference to the actual time served by my father-in law as an apprentice French Polisher at Cammell Laird’s when he was fifteen. My father-in-law went on to spend more of his working life at the Vauxhall Motor plant in Ellesmere Port, but it was his apprenticeship at Laird’s that provided him with a “trade” and craft skills he could be proud of, that he was able to use again in the final job he did before retirement - working as a French polisher for a family-owned furniture restoration company.

The photographing of my father-in-law’s material possessions within his private living space, was an intrusion and an invasion of not only his, but also my mother-in-law’s intimate lives, and as such, is an act of violation (despite the consent of my mother-in-law). But this violation is productive, in that the photographs and photobook allow through their capacity to bear witness and tell the truth (at least aspects of the truth), the revelation of his (and my mother-in-law’s) position within the totality of social and economic relations in Britain within this historical period. At the same time, it also allows me to communicate something about the ‘hidden injuries’ of class’.

Skeggy is an A4, forty-page, colour photo zine about a week-long family holiday in a caravan on a Haven holiday park near Skegness.

Skeggy is an attempt to communicate a sense of the lived experience of a seaside caravan holiday. The caravan that appears in Skeggy was in a Haven holiday park, but it could be a caravan in any British holiday park as most have similar forms of facilities, staff and entertainment.

Photographing my own family holiday offered a way of recording the intimate dimension of working-class holidays and life. My husband and daughter’s immunity to me taking photographs was also beneficial for capturing them off guard and at their most natural, and this is a way of also coming closer to the lived experience of the holiday.

When I was a child in the 1980s, seaside holidays were for those like my family who couldn’t afford package foreign holidays. One of my mother’s outstanding memories of our family caravan holidays is of “money flowing through her hands like water” and my father having to “constantly get money out of the cashpoint”. A generation later and my husband and I experience the same money worries and trips to the cash point that our parents did on our caravan holidays (when we can afford to go on one). Yet, despite this experience, caravan holidays are still something we both feel nostalgic about because of how much we enjoyed them as children.

At the End of Your Stay Cleaning Must be Done is an A4, forty-page, colour photo zine about a two-week family holiday in a static caravan, in a holiday park, in the south of France.

The title At the End of Your Stay Cleaning Must Be Done is an extract from a document that was emailed to me by the owner of the static caravan before the holiday. On the last day, my husband and I spent the entire morning cleaning the caravan before it was inspected by the owner’s representative, in the same critical way that a landlord would inspect a property that was being vacated. Had it not been cleaned to a high enough standard then our large deposit would have been lost. Using this extract as the title was a way of attempting to communicate to the viewer a sense of the economic aspect of the holiday that underpinned nearly every decision made.
​
As John Clarke and Chas Critcher observe, ‘inequalities of leisure are often invisible and intangible [and] difficult to measure’ (Clarke, Critcher, 1985:178).  Although ‘leisure inequality is less recognised and recognisable than other kinds of inequality does not make it any the less real […] muted and modified though it often is, leisure does ultimately express those social divisions and systematic inequalities inherent in the organisation of contemporary capitalism’ (ibid, 1985:178).

Funland is an A4, forty-page, black and white photo zine about a family’s weekend in Southport.

Southport is a town and a seaside resort to the north of Liverpool which like New Brighton - the subject of Martin Parr’s The Last Resort (1986), is popular with day trippers from Liverpool. Because of this, it is a place which in photographs is likely to arouse feelings of nostalgia for many working class individuals from Liverpool who like myself, were taken there as children.

Lavinia’s Christmas Party is an A4, forty-page, black and white photo zine about a children’s Christmas party held in a sports centre in Walton Hall park, in the north of Liverpool.

Lavinia’s Christmas Party represents one of the ways in which working class individuals and communities find ’other routes to valuing each other outside the circuits of exchange that demand a value-return’ (Skeggs, 2011:504). Lavinia organised and hosted the party out of the goodness of her heart - because it gave her pleasure to show generosity towards friends and her local community. When I told Lavinia how kind I thought she was for going to so much trouble and for evidently having spent so much money, she replied: “you only live once”. This sense of community and neighbourliness is something that I grew up with but mistakenly thought had disappeared.

Home Baked is an eponymously titled A5, forty-page, colour photo zine about a bakery which serves the local community as well as the fans of Liverpool Football Club which sits opposite.

​Like Phil Manion North End Bakers, Mitchell’s, which opened in 1903, was able to survive the growth of supermarkets and many of the changes to local high streets. Yet the two elderly Mitchell sisters who worked there, were forced to sell the bakery after it was earmarked to be demolished as part of a Labour government’s Housing Market Renewal (HMR) Pathfinder Programme for the area. The programme which involved refurbishment or demolition of old homes and the building of new homes, was introduced in 2002 as an attempt to deal with ‘falling house prices, high vacancy rates and, in extreme cases, housing abandonment in a number of towns and cities in the North and Midlands of England’ (Leather, Nevin, 2011:856).  ‘In Anfield, the slow phasing in of the scheme meant that some residents would not be bought out by the local authority for many years so were trapped living in homes surrounded by derelict properties’ (Leeming, 2006:3). To add to this, in 2010 the programme was then brought to an abrupt end by a Conservative/Liberal Democrat government ‘without a formal review of its performance or a risk analysis of the social and economic impact of its termination’ (Leather, Nevin, 2013:858).

If they don’t want to get behind him, well they know where they can go… is an A4, forty-page, black and white photo zine about a rally held in Liverpool’s Liner hotel to support the Labour Party leader Jeremy Corbyn in 2016, following the failed coup to remove him by a group of Labour MPs from the right wing of the party.

Phil Manion North End Bakers can be compared to Chris Killip’s Pirelli Work (2006) which reflects an older approach to documentary photography - using black and white film and representing working class subjects as dignified workers rather than hapless consumers. In Phil Manion North End Bakers, I also focus on a public aspect of working-class life but hope that like Killip that I still manage to communicate a sense of the personal through my approach and sensitivity towards the subjects I photographed.

The hand-written statements in Phil Manion North End Bakers: The Workers reveal much about the history of Phil Manion North End Bakers, different aspects of the business, the reasons why people choose to work there, the pride the workers have in their jobs and the lives and interests of the workers outside of their jobs. By printing the statements in a separate booklet, the loose narrative of the photographic sequence which creates a sense of a typical day of work in Phil Manion and the lived experience of working there, is not interrupted by the writing and the writing does not distract from the flow of photographs. The writing provides additional depth to the viewers understanding once the photo zine has been looked at. The process of making these zines as well as critically analysing  British photobooks taught me that photographs communicate lived experience well enough without text even though text can bring an added dimension to our understanding of the theme/s of the work.