Ruth White
Family History (2010)
Family History by Ruth White | Make Your Own Book
Family History is both a film which features a series of photographs projected on to a wall accompanied by the sound of an old film projector and an autobiographical photobook. Essentially the work is about my feelings of alienation growing up. The old cine camera was chosen to obscure the heads of the child throughout the album/book in order to represent the influence of the media on identity and perceptions of the family. Growing up I always compared my family to the middle class, cheery representations of family on the TV, and of course, they never matched up.
Wavertree to Wigan (2015) 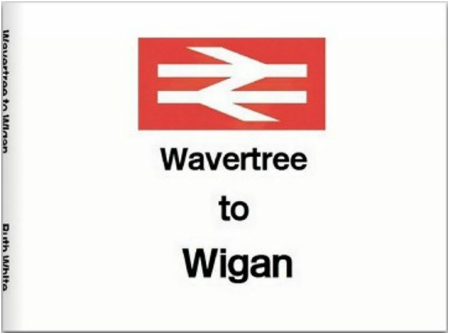 Wavertree to Wigan is a photobook, designed to look like a booklet that you might pick up at a British Rail train station. It features a series of photographs taken during a single train journey. It was the first photobook I ever made: Click here to view the book as a PDF
Only two copies exist - one of which is owned by Manchester Metropolitan's Special Book Collections Museum and is available to view there: ​Wavertree to Wigan | MMU Library (worldcat.org)
​
The Working Class (2016)
The Working Class is a semi-autobiographical book, made using a single sheet of A3 at the 'Artful Prose' workshop at MMU 22/01/2016. The images came from a box of royalty free illustrations. The limited amount of images directly influenced the theme of the book and what I chose to communicate. We didn't have long and I worked right up to the very last minute. I wrote the text in coloured pencil then when I got home I word processed the text to make it fit more with the style of the old English 'catchpenny' illustrations. Amanda Ravetz kindly pointed me towards this website where I discovered that:

Catchpenny prints reported – for one or a few pennies - in word and image on important events, such as catastrophes, crimes and battles. Prints depicting the lives of saints or Biblical scenes manifested devotion and religious convictions. Quack doctors, old spinsters, henpecked husbands and victims of swindle were ridiculed [...] Catchpenny prints were printed on cheap paper of a slightly larger size than the present A3-format and contain one or more illustrations, generally accompanied by a brief text. The catchpenny prints were often sloppily coloured and they were especially geared to a public with little purchasing power. In the past they have also been called children’s prints, popular prints, ‘oortjes’ prints (in Dutch money, an oortje was a cent and a quarter), saints or ‘mannekesblaren’ (in Dutch: little fellows’ leaves). The term ‘catchpenny prints’ emphasizes an economic aspect: for a long time catchpenny prints were the cheapest illustrated printed material in the Netherlands

The book will be able to be cheaply photocopied then given away for free in suitable locations.